Mada Assistive Technology Center is keen to provide international best practices to support older persons through training initiatives and programs, guidelines and partnerships. The Center consulted with international experts and specialists of the Department of Geriatrics at Hamad Medical Corporation to review and evaluate the impact of video games on the elderly.

Information and Communication Technology (ICT) plays an important role in the life of the elderly by maintaining cognitive abilities and refreshing the memory using video games and applications. Recent studies confirmed that playing specific video games could enhance individual skills. It helps improve cognition, brain and memory performance. Various video games, puzzles and applications have been developed specifically for this purpose. They primarily motivate deep thinking and enhance concentration.

In a study at the University of Illinois in the United States, 40 people aged between 60 and 70 years were asked to play a strategic video game for 24-hour over two months. After the end of the test period, the abilities of those people were improved regarding memory, thinking, perception, planning and approaching ambiguous and multi-tasked subjects.

Many recent studies concluded that brain training -online games- is beneficial for the elderly. Researchers at King’s College in London found that mental training kept minds sharp and helped people do daily tasks such as shopping and cooking. Researchers found that those who exercised brain training, thinking games and problem-solving activities -5 times a week for at least six months- retained better cognitive skills better than those who did not?

A study by the University of Cambridge showed that video games improve brain function for those with memory problems that can be a precursor to Alzheimer’s disease. Experiments were conducted on a new game application involving 42 patients over the age of 45 with cognitive impairment related to memory loss that could be an introduction or a warning of dementia. The results showed that those who played the game improved their “occasional” memory by about 40%, which helps in daily activities such as remembering where the car keys are or where did the person park his car in a multi-level parking.

Researchers from Canada said that 3D computer games can help the elderly maintain their mental capability. Where they found an increase of the grey matter in the brain of those who played a certain game for a certain period. It is known that the decline of this grey matter is partly responsible for major diseases such as Alzheimer’s.

Based on these studies and research, MADA partnered with the General Retirement & Social Insurance Authority and the Center for the Empowerment and Care of the Elderly (Ehsan) to hold two workshops on “Video Games for Brain Activities” for the elderly. The aim of these workshops was to educate the elderly about problems related to memory impairments, such as Alzheimer. They also learned about the most common signs of memory loss syndrome, and how to prevent poor memory through exercise, physical activity and writing/reading activities.

The Mada Center also invited the international expert Panagiotis Bamidis, Associate Professor of Medical Education at the University of Aristotle, Greece, and a visiting professor at Leeds University in the United Kingdom, to present at a workshop about “Improving the lives of the elderly through innovation and technology”. Prof. Bamidis emphasized the important role of video games combined with physical exercises in the development of physical and mental health. Prof. Bamidis highlighted the role of these games in enhancing motor and cognitive functions to support the elderly in their daily activities. He particularly emphasized the importance of video games involving video recording and sensors to help achieve physical balance of the elderly.

Assistive technology offers new ways to help the elderly maintain their mental and physical health. Using a specific video game or application can be a source of entertainment maybe an opportunity to enhance mental health and stimulate memory at the same time. 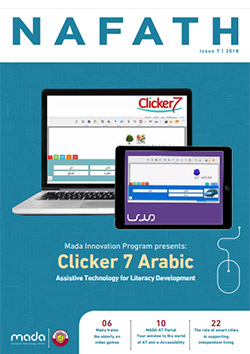 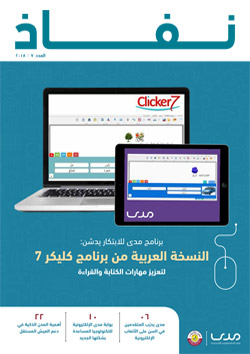