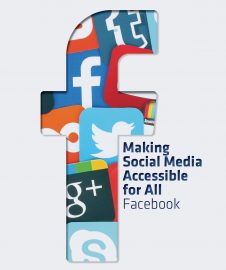 Through a series of articles, Nafath will focus on the accessibility features put in place by prominent social media platforms. According to a 2019 study by Oxford University and the Global Change Data Lab, social media platforms are used by one-in-three people in the world, and more than two-thirds of all internet users. Access to them is a fundamental right, that once fulfilled, will ensure the inclusion of a large portion of the world’s population, empowering them to create and share content in a manner that is barrier-free.

For the first part of this series, Mada will focus on the accessibility features of Facebook.

Launched in 2004, Facebook has dominated the social media realm for the last 15 years. The multidimensional space claims to have a staggering 2.3 billion active users as of December 2018. For many around the world, Facebook is the Internet.
Facebook, which can be accessed through the Internet from multiple devices and platforms, including laptops, tablets and smartphones, allows users to create their profile, revealing a variety of information about themselves. Once set up, users can share text, in multiple languages, along with photos and videos with their pre-approved contact or friends list. Additionally, users can make use of a wide range of apps, including games, or they can join common interest groups, and even post and apply for work, or buy and sell products and services.

Key functionality of the platform is notifications, which alerts users on activity by their friends, pages they are members of or apps that they use. As such, every time a user logs in, they can see what kind of activity took place since they last logged on. This includes how many likes or reactions a post has received, prompting the user to respond, hence the social aspect of the technology.

With a platform that is so multi-functional as Facebook, it is imperative to ensure that despite its complexity, it remains accessible to People with Disabilities, particularly those that use Assistive Technologies, such as screen readers, refreshable Braille displays or switches to access the platform. This has not gone unnoticed by the California based Facebook team, which has embedded a series of accessibility features into the platform. Here is an overview of them. A central component of Facebook’s accessibility efforts is the accessibility help centre which features a wealth of information for users with disabilities that want to learn more about what features are available to them.

Navigation assistant is a tool for people who rely on screen readers or keyboard shortcuts to get around Facebook. For all screen reader users, the navigation assistant is always the first element on the page, even when it can’t be seen visually. The assistance can also be launched from any part of Facebook, and users can move the focus from the browser toolbar to the webpage using the Tab key.

Being built according to global e-accessibility standards such as W3C-WAI WCAG 2.1 means that Facebook is compatible with most major screen readers. For Mac OS and iOS users, the platform can be accessed through the built-in Voiceover feature. Similarly, Android users can access the Facebook app using TalkBack. For Windows desktop users, Facebook recommends Job Access With Speech (JAWS) and NonVisual Desktop Access (NVDA) as compatible screen readers. Additionally, Facebook also has a robust troubleshooting team that can be reached through different social media with regards to any concerns surrounding screen reader usage.

Facebook can also be controlled through mainstream voice recognition tools such as Dragon Naturally Speaking. In addition to being able to navigate the platform, users can also post comments or content through voice control.

To ensure that people with hearing disabilities can enjoy video content in an equitable fashion, Facebook has provided users with a robust set of tools that enable them to add closed captioning to their content.

One of the most important features of any accessible digital platform is the presentation of text and colour in a manner that is legible, and in accordance with international standards for size and contrast respectively. Ideally, the platform would enable users to customize font and colour settings to better suit their visual needs. This is usually a feature that is built into the settings of an operating system or a browser. For its part, Facebook provides users with information on how to make such changes.

In addition to featuring a slew of mainstream accessibility features, Facebook’s accessibility ambitions are also very forward-looking. In 2016, for example, it launched something called automatic alt-text (AAT) for people using screen readers to identify what’s displayed. AAT uses object recognition technology to generate descriptions of photos on Facebook. So if a user posts an image of a pizza, Facebook will correlate the image posted to its library of images and tell the user that the image may contain an image of food or a pizza (see below).

The same type of feature has been extended to pictures of people, where Facebook leverages face recognition technology to label the faces of people featured in images, thereby allowing people with visual disabilities the ability to ascertain who is featured in an image.

Moving forward, Google, Microsoft and Adobe have teamed up with Facebook to launch a program that brings together students, teachers and industry partners to explore accessibility. This will include research on how to support people with dyslexia who might have apprehension around posting content and developing an alt-text tool for a video that would describe content for people with visual disabilities. It is without a doubt that a platform with the reach of Facebook, that any accessibility gains made on the platform will have an impact on the way people interact with digital content wherever and however they may be logging in. 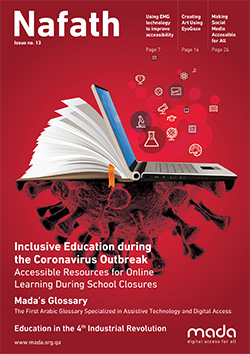 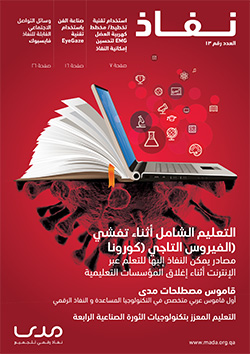