In 2018, Innovation Factory Limited developed a unique smartphone application called “Qatari Money Reader” fully funded through the direct grant stream under the Mada Innovation Program (MIP, 2021). The app can scan and identify Qatari currency by just using the camera of the smartphone. The solution was effective for people with visual impairment & the elderly while retaining their privacy by identifying the value of the notes when they are in public places or when they need to count their money. In Addition to that, the app includes other features like reading the Qatari Riyal currency in real-time and works entirely offline without the need to have internet connectivity. Once the currency is detected, the app will inform the user about the value of money in Arabic and English. With the update in the Qatari Bills, the Mada Innovation program supported the development of Money Reader App V2 with added features like new bill detection, Counting notes, Exchange notes and Experiment on fake note detection. Mada hosted focus groups and user testing sessions to evaluate the application before the official dissemination.

Primarily, identifying the value of banknotes is one of the main challenges faced by people with visual impairments and elderly (Tian et al., 2019). Such challenges make it hard to exercise basic daily activities, like needing to seek assistance to determine the value and authenticity of such bills. There is a necessity for developing solutions that can evaluate the authenticity and value of local and major international currency bills using a mainstream device such as a smartphone. The increased hardware capability and portability of such devices make them ideal to serve as suitable platforms to integrate app-based solutions to resolving such challenges (MIP, 2019).

Traditionally, assistive technologies for the blind and visually impaired and elderly community tend to be in the form of expensive dedicated devices (e.g., braille readers, document magnifiers, computer screen readers, etc.) (El Ghoul et al., 2020). Mada Innovation program MIP (Al-Thani et al., 2019) intends to offer support to such solutions to solve daily life problems by incorporating the assistive technology solution into a mainstream device. This makes the solution available to a much wider range of users with Arabic and English language options having a significant impact within the blind, visually impaired and elderly community.

About the “Qatari Money Reader” application

With time, the “Qatari Money Reader” application received various feedback from users to add more features that it’s important for their daily life. For instance, when they travel abroad which will allow them to live independently without asking for help from the public or get scammed with fake notes or the incorrect amount by strangers. Also, the change in Qatari bills in early 2021 has made it mandatory for the app to be updated and modified with improved features.

Furthermore, MIP supported and funded the development of the upgraded version of money reader application has the first of its kind algorithm to calculate multiple currencies, exchange rates and can identify fake notes through the smartphone camera and through using the deep learning approaches using an UV light attached to the smartphone. Also, the program supported the money reader app in several steps of the project including the development, testing, and dissemination of the product through focus groups, user testing and show & tell sessions (MIP, 2021).

How does it work?

TensorFlow Library (Abadi et al., 2016) was used for image classification and high-performance numerical computation. It supports many classification and regression algorithms, and more generally, deep learning and neural networks. The system works by using a set of sample images of Qatari bills which are used to train a set of classification algorithms. The system is not trained by hand and does not rely on any hand-picked distinguishing characteristics usually found on such bills. Instead, a more robust machine learning approach is followed whereby the training data is used to guide the algorithm in recognizing similar bills when they are later presented to it by the visually impaired user. The current system design focuses on QAR, GBP, and US currency bills but the technique can be easily extended for other currencies.

A subset of image classification with object detection, where specific instances of objects are identified as belonging to a certain class of scanned bill was applied. In this specific case of image recognition, the features are the groups of pixels, like edges and points, of an object that the network will analyze for patterns. The approach is scanning a wide range of parameters on each note: 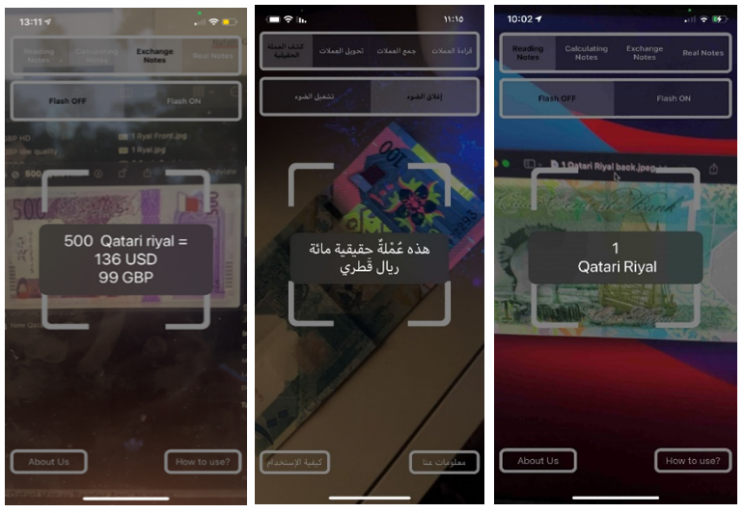 The money reader app v2 had an experiment feature to detect genuine notes using UV lights. This feature was embedded to evaluate the effect on the bills and implement it permanently. For the genuine note’s detection, the app requires an external UV light which will allow hidden patterns to be visible on the notes. Furthermore, the app is using an image processing approach to scan notes and detect them when hidden patterns are matched with the database. The updated features in the Qatari Money Reader app are:

User testing and focus group sessions were organized with eight attendees including people with visual impairments to discuss their needs and to provide feedback on the new version of the app. During the sessions, Easy to use feature, no buttons are required to use this feature only scan the targeted notes and will tell the exchange rates for other notes was appreciated by the users. IOS and Android Mobile phones loaded with Money reader Application was provided with a mix bag of New and old Qatari bill was provided to all attendees to test the application.

During the focus group session, the user highlighted how such an app will improve the independency and secured retail experience for the person with visual impairment or blindness. The solution ensures that persons with blindness can transact their monetary requirements independently and secure manner during their retail experience. 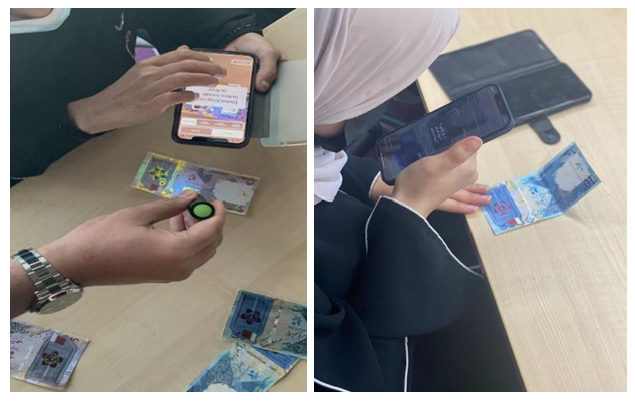 Based on the focus group and user feedback, the application includes scanning of the US dollars (USD) and British pounds (GBP) as those are the most commonly travelled destination, the app in total will support those currencies which will allow the user to feel independent. The app does not require internet access to get the exchange rate values as it has stored the last values from the market and when the connection is back the app will update all exchange values. Additionally, the counting notes feature allows users to count all 3 notes: QAR, USD, and GBP. At the same time, fake note detection using external UV light, the app was able to recognize all hidden patterns via the smartphone camera and notify the end-users when genuine notes have been detected.

Thus, the new version of the Qatari Money Reader app is one of the successes achieved by the Mada Innovation Program, which was designed to encourage innovators to find solutions in Arabic for people with disabilities and the elderly. Lastly, the adoption of such solutions would also aid in eliminating the circulation of fraudulent currency notes by allowing users to instantly validate the authenticity of their notes. 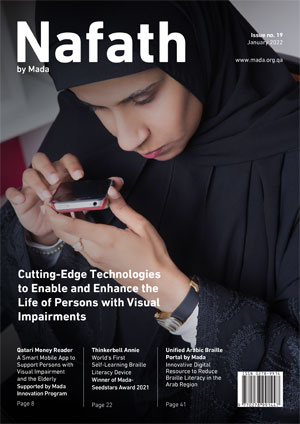 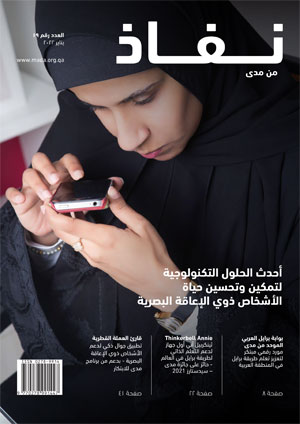