Individuals with profound speech and language difficulties rely on Augmentative and Alternative Communication (AAC) systems to supplement or replace existing speech in order to effectively communicate with others. AAC is a collective term that refers to alternative communication methods that replace speech or writing for those with impairments in delivery and comprehension of spoken or written language.

Previously, the use of AAC in Qatar and the Arab region has been challenging as the education sectors are mainly supported by English speaking educationalists using AAC symbols developed by and designed for the USA and European users. These symbols often tend to have different cultural and contextual representations when presented within the local Arab society. Additional challenges towards using westernized symbols sets within the region involve therapist and teachers being from a different language and cultural background compared to the AAC users. Furthermore, Arabic language is spoken differently when communicating in formal Arabic and colloquial Arabic.  All such factors related to the need to effectively communicate within a society with varying verbal communication languages/styles, along with different interpretation of visual symbols on a cultural and contextual level had raised the need to develop an AAC symbol set to cater for the concern population.

To address this challenge, in 2013, Mada Center had embarked on a project to develop an AAC symbol-set called “Tawasol” that focused on Qatari Arabic language. The project was launched in collaboration with University of South Hampton and under funding from Qatar National Research Fund (QNRF). The Tawasol Symbol Set is designed to be suitable for bilingual (English and Arabic) use, along with consideration towards vocabulary and symbols that are culturally and contextually appropriate for the local society. Currently, the Tawasol symbol set contains more than 600 words in its vocabulary.

A dedicated online platform has been developed to make the Tawasol symbols available for teachers, therapists, parents, and developers. The platform allows users and relevant professionals to download the symbol set for use within their environment (e.g. home, school, etc.) along with the associated training resources to utilize it.

The Tawasol Symbols online platform is further extended to offer an API for developers to be able to integrate the symbol set into any applications being developed.  The API for Tawasol is a set of subroutine definitions, protocols, and tools for building application software. In general terms, it is a set of clearly defined methods of communication between various software components. The API can be used to develop new AAC Apps using Tawasol symbols for android and iOS.

The API is the first of its kind tool to allow developers to create Arabic AAC apps for the region. This will support the integration of Tawasol Symbols in existing and new AAC apps. It is intended to eventually expand the range of available Arabic AAC solutions for users in the region and lead towards enhancing the Arabic Assistive Technology and Accessibility ecosystem.

To maximize the impact on Arabic AAC users in Qatar and the region, Mada has introduced the first fully functional Arabic AAC app using the Tawasol Symbols. The Tawasol AAC App is one of the innovative solutions supported by Mada through the Mada Innovation Program. It has been developed by following the international guidelines governing AAC methods, as well as transforming speech models into alternative and enhanced communication by following the principles of verbal behavior and the analysis of applied behavior.

The current English AAC solutions doesn’t not provide the cultural contexts nor the language necessary for the Arabic-speaking Qatari community. Tawasol Symbols provide a great opportunity for non-verbal communication that is culturally appropriate to the Qatari and Arabic user. Merging these symbols into a single application enhances the ability of non-verbal people to communicate with others. Tawasol App aims to use Tawasol Symbols for improving communication skills for people and children with communication or reading and writing difficulties.

This application is designed to be highly customizable so that teachers and families of AAC users can modify it to meet the communication needs of the users at home, at school or elsewhere. Providing a comprehensive Arab communication tool, the AAC users will be able to engage in society by talking to others and expressing themselves. By enabling them to communicate, people with disabilities can get better opportunities to communicate, learn, work and live independently.

Moreover, and as part of Mada’s commitment to improve the educational landscape for persons with disabilities, a nationwide competition was lately organized in Qatar to encourage the development of new educational resources using Tawasol Symbol. The event involved teachers from various schools to participate in creating educational resources for their students using the symbol set.

Using the Arabic language to provide a technical solution consisting of appropriate words and symbols will facilitate and improve the lives of people who are unable to communicate in English. In addition, the expressive language resulting from this application can be understood by family members, relatives, the school and the community who speak the Arabic language. 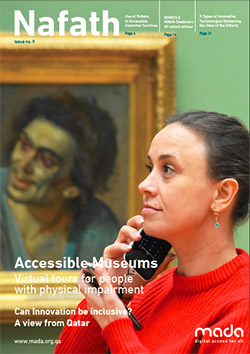 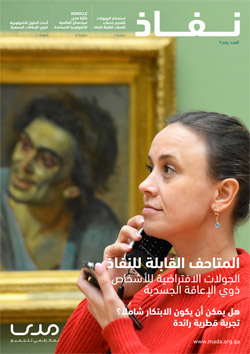